Hello to all Santa's blog followers and friends, 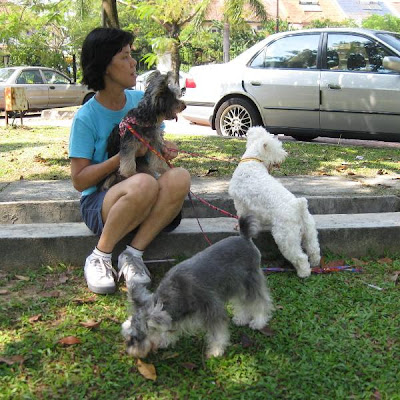 I started this blog in 2008 as a diary to record Santa's activities with lots of pictures. Santa was my sister's first puppy that I helped to doggie-sit during the week. (Read about it here)

So much has happened since then, Santa and Minnie have moved to live with Cindy (my sister, the furbabies' Mummy), and Christmas and the girls are with me.

As Santa doesn't live with me anymore, I am not able to keep a diary of her, as what this blog was intended for. I'll have to leave this blog just for Santa and Minnie and I'll be starting a new one for Christmas and the girls that are with me. However, that does not mean the end of this blog. Occasionally, I may do an entry in Santa's diary.

As for the new blog, which I have named Four Miniature Schnauzer Girls And A Maltese Boy, is still in the making. Yes, I now have five of them! 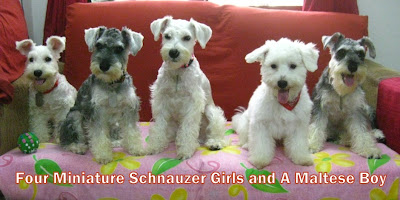 See you all over at our new blog!

Mum said it seemed you had abandoned us for Facebook! We don't do FB so we were VERY sorry about that......BUT....we are in luck it seems!!

It is so good to hear from you. We ae happy that all is well. Making a new blog seems to make a lot of sense to us. And we are happy that there will still be news of Santa and Minie.

Can't wait to learn more about the new one. Did you know we have a new one too?

Oh my word look at all those furry kids. Keep us updated
Benny & Lily

Thanks for the update. See you soon.

So glad you will be blogging again soon 'tho my Mum's been following you on Facebook and love your new addition to the family Gabriel the 'honorary' schnauzer :-) Looking forward to the new blog love from Magic xx

It is so nice to see you back Diana.
Wow, 5 of them, how wonderful!
We are looking forward to hearing all about their adventures.
Wags, Dip Bridge and Elliot x

What a great surprise for us this morning when we saw your post!

So happy to hear from you and that you'll be setting up a new blog. We love hearing about the girls....and boy.

Hi and welcome back, Diana. Glad to hear from you. We wondered what had happened to Santa... We will look forward to reading your new blog.

We have missed you and looking forward to reading your new blog!!

You have great dogs. Cheers!

Just love your beautiful blog! All your furkids are just precious! Hope you're having a wonderful Saturday.
Cheers!
Holly & Phoebe

happy happy puppers! so much fun!

It's glad to see you blogging again. You have five beautiful and cute babies, good luck to you.

Military Challenge Coins
Hi your all posts rocks thanks for sharing and just keep up the good work.

I love this blog, it's sad that we won't be reading any more about Santa as the family story really seemed wonderful to follow. While I have no experience with Miniature Schnauzers, to did train my little Chiuaua, Zeus, and the joy that the small breeds give, along with their fun, quirky personalities really make them a joy to include in a family. I hope your new blog is going wonderfully, and I'll be sure to check it out very soon :)
Darren

So happy to hear from you and that you'll be setting up a new blog. We love hearing about the girls....and boy.Challenge coins